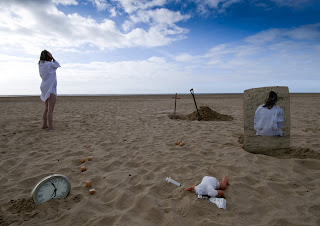 This shot is about my nightmares, worries & fears.
This shot is set on a beach because whenever I have nightmares they involve the sea and waves engulfing me. The shot involves a lot empty space, a feeling of vastness, to show my fear of loneliness.
The clock which pays homage to Dali in its deformed form, represents my fear that time is not on my side and I don't know when my number will be up.
The baby with the needles sticking out of it represents my childhood full of medical intervention and the tablet packets around it represent this ongoing issue.
The eggs, some whole, some broken represents my fears of infertility because of all the medical things I have been through. The grave - my fear of death and finally the mirror which represents this fear in a different way. The mirror has the names of friends I have lost to Cystic Fibrosis written on it- as well some family who have died. In the mirror you see my back is reflected and this all indicates my fear of going to this same place (death if you will) that all these people have. The reason you only see my back is because once you are gone there is no way back, you are lost infinitely to the world and this scars me more than anything. 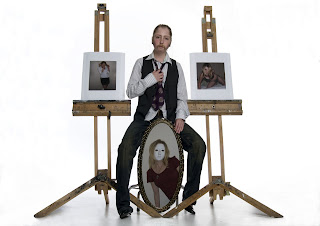 This shot is about the different faces I project to world and the inner me.
First, whether we are male or female, it is possible to feel like we have some opposite gendered traits. I certainly feel I have an amount of masculine in me, it is not something that is obvious to people on the outside but i feel it. This is why I have depicted myself as a man yet if you look closely I'm wearing stilettos which I did to interrupt a strait reading of the image, so people might realise this is a metaphor rather than a solid idea. The image on the left is me as a school girl. I look very young for my age and I know when some people look at me the think I am very much younger so this represents that face I seem to project to the world unwittingly. The image to the right is the sexy side of me, the side that is naughty, the side my boyfriend sees. The final shot in the mirror represents the face that no one gets to see, only me and that's the way it will always be. 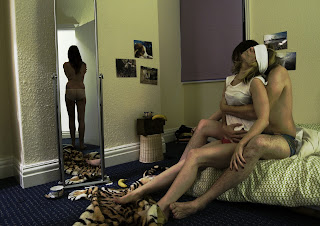 This shot is about love, desire and relationships.
This image pays homage to Freud's interpretation of dreams, with the mini set of draws with bananas in- male and female genitalia and the tiger representing wild animals and therefore the idea of repressed desires. I wear a blindfold to express that in love very little is visually assessed and far more is felt either with the heart or body. The female leaving the room reflected in the mirror represents this idea that when, as a woman, you come to a new relationship you know there has been another woman in the bed before you, in the place you are now. The way the woman is depicted walking away symbolises reaching a stage in your relationship when you are able to forget the past, when you have reached a new level of trust between you and your partner. 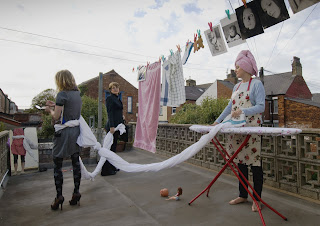 Mum has had an impact on so many parts of who I am, biologically and specifically in the things I have learned, like/dislike and think.
In the shot the washing line represents my mum's independent life before marriage and us. The photos of her are from when she was a model which influenced my love of fashion-shown in me wearing my favourite shoes and holding a lipstick. Under the washing line, to the right, we see her life as a mother and home maker which is also referenced in items on the line above her. The image of mum in the suit at the top of the image with briefcase represents my Mum deciding to get an education, which lead to a career. The sheet which she is holding that is wrapped round me and goes back to domestic mum represents that all these area of her life have fully influenced mine. The book I hold represents how education is key in my life this independence she found is shown in the way I look away from both mum's to my a life ahead. The reflection of me in the mirror at the far left of the image shoes how I have been influenced by my Mum as home maker also.
Posted by Sammi Spark at 07:08 No comments: